Home »Campaigns»Postcards from the Fringe briefing

Evidence from families affected by GIRFEC

View the postcards submitted by families

* The bill was withdrawn in September 2019

A ‘fringe’ event was held in Edinburgh on 15 November 2017 to hear families’ own testimony on the Children and Young People (Information Sharing) (Scotland) Bill, which is currently before the Education & Skills Committee of the Scottish Parliament.

Although the government has claimed the new bill will remedy the defects of the Children and Young People (Scotland) Act 2014, evidence from those adversely affected by the GIRFEC policy and the premature implementation of the named person scheme were excluded from Holyrood’s invitation-only evidence sessions and focus groups.

Many vital questions were left unasked by committee members during the evidence sessions and families’ own views and experiences were sidelined.

In order to redress the balance, Tymes Trust and the Scottish Home Education Forum issued their own call for evidence, which culminated in the submission of over 90 ‘postcards’ of evidence.

‘Postcards from the fringe’ also allowed attendees-in-person to respond to questions that had arisen from the evidence submitted, and to raise other points for discussion.

A delegation of parents and children later visited the Scottish Parliament to deliver their evidence to James Dornan MSP, convener of the education and skills committee.

Reflections from the Fringe

Participants were asked whether they believed the new bill would satisfy the terms of last year’s Supreme Court ruling, which struck down key provisions of the 2014 Act, and how they thought the government and parliament should proceed in the face of continuing opposition to its proposed legislation and an overarching policy framework which places state outcomes above citizens’ autonomy.

Much discussion focused on the data sharing and undefined, subjective notion of ‘wellbeing’ on which the named person scheme and wider GIRFEC policy rely, and inconsistent messaging (support or mass surveillance?). Other recurrent themes were the lack of access to justice for those whose human rights had been, and continue to be, infringed by public and third sector bodies, and the lack of accountability of those who failed to get it right in the face of case law and legal opinion that had predicted the outcome of the judicial review.

Families believed their own evidence and experiences had been filtered out in order to push through legislation and a code of practice whose only purpose is to seek circumvention of the Supreme Court ruling. Persistence with a policy that depends on non-consensual data processing will therefore result in:

Participants also identified a number of citizen-driven actions they were now willing to support without reference to ‘services’ or ‘representatives ‘who have  excluded them in favour of state-sponsored charities, professional bodies and quangos:

A letter was sent to James Dornan MSP on 28 November 2017 seeking a response to families’ calls for a public inquiry as well as abandonment of the bill.

The convener’s response was received on 14 December 2017.

The last word goes to a young person who makes his views abundantly clear. 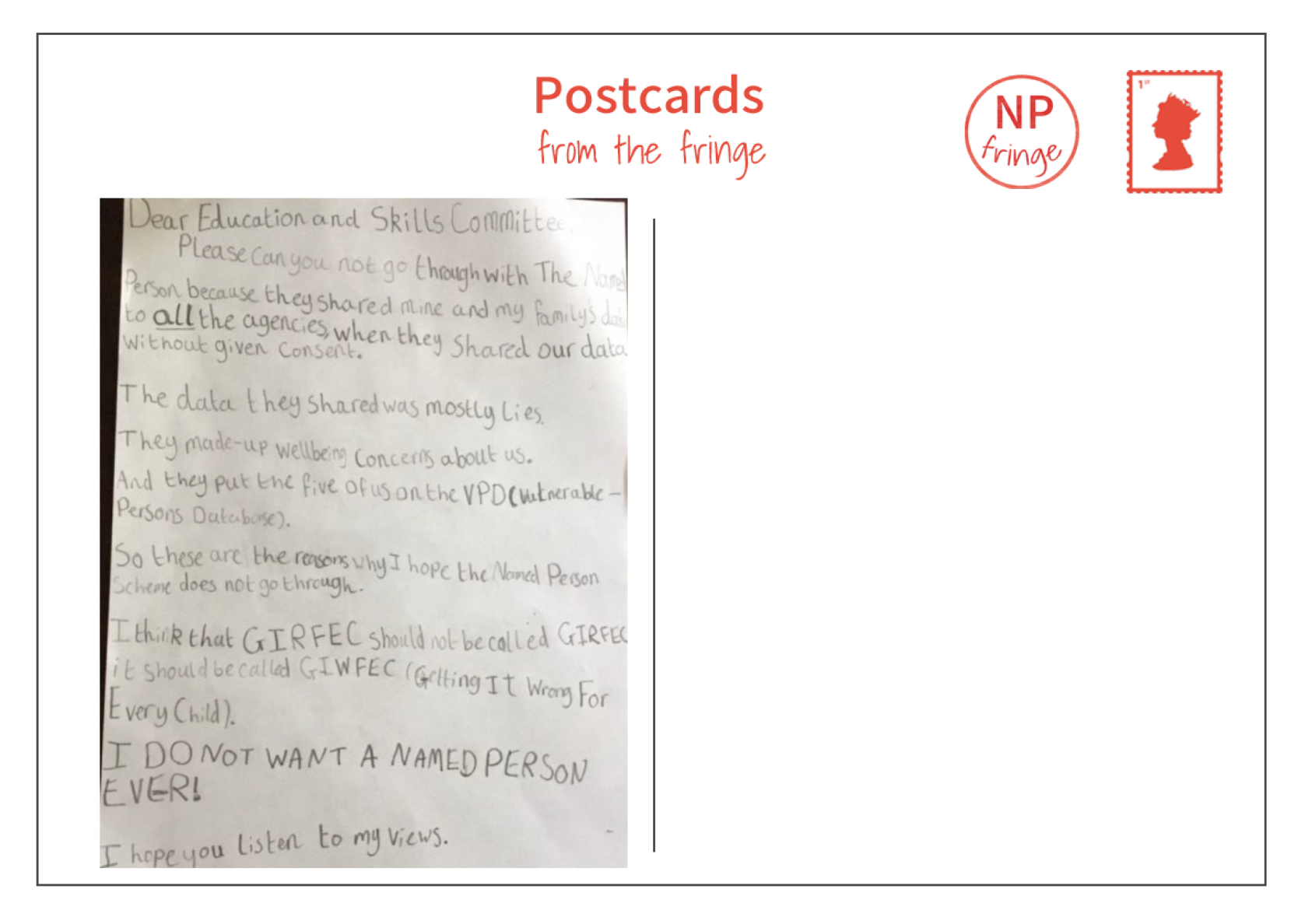