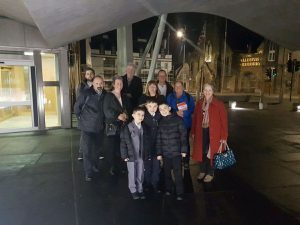 Families from the Fringe

Tymes Trust and the Scottish Home Education Forum hosted a Fringe Evidence Session in November 2017 to seek views on the Children and Young People (Information Sharing) (Scotland) Bill to provide an opportunity for those who had been sidelined by the Education & Skills Committee and denied the right to make their voices heard, The evidence, in the form of postcards from families, was delivered to the committee convener and led to the submission of a joint parliamentary petition calling for a public inquiry into the human rights impact of GIRFEC.

Following a Judicial Review brought by the NO2NP campaign, the UK Supreme Court struck down the information sharing provisions that were central to GIRFEC and the named person scheme on 28 July 2016 in a binding judgment which has implications for all other legislation and policies, including home education guidance.  The Scottish Government’s planned scheme undermined parents’ responsibility for their own children by allowing state officials unprecedented powers to interfere with family life. This campaign has been actively supported by the Scottish Home Education Forum and other parenting groups.

Action on Rights for Children (ARCHrights)