The Soley bill (Home Education (Duty of Local Authorities) Bill (HL Bill 11)) has now had its second reading in the House of Lords.

Those who managed to stomach the ‘debate’ witnessed too many lords a-leaping to ill-founded conclusions, encouraged by the usual suspects preaching prejudice against home educators without producing a shred of evidence to support their poisonous opinions.

Grave-robbing has never been a good look, but seeking to make political capital from the deaths of children known to social services (who failed  to take action) was all they could muster in an unedifying competition to see which out-of-touch, over-privileged trougher could incite the most hatred against law-abiding home educating families.

It begs the (rhetorical) question, what exactly is the purpose of  state schooling? Education or state indoctrination? John Taylor Gatto has shed significant light on this, interpreted here by Scots artist Chad McCail. 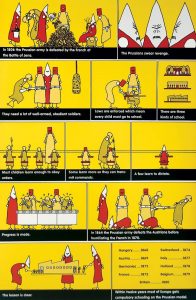 Give Lord Lucas his due (and we have been critical of him on our forums in the past), he was mostly on the ball, but some of the others seemed to be channelling the East German Stasi.

It is clear that the exposure of the now infamously fake statistics and lies in the biased Badman review, and subsequent failure of the Balls bill, still stings, especially for the ermine-clad Labour peers who continue to fleece the taxpayer from different-coloured benches without the bother of having to be elected.

The UK government now promises new guidance for England (with Wales riding along on their coat-tails) following a public consultation, but the omniscient Lords claim the home ed problem is acute in Scotland too. Aye right, best take a gander at last year’s Supreme Court ruling which halted the Scottish government’s similarly totalitarian plans for parent licensing.

One thing is for sure, they know how to poke a hornets’ nest and can expect a Brexit-sized headache as home educating parents are known to be especially difficult and dangerous prey.

As legislators, the Lords should be expected to get the terminology right at the very least, and to realise that ‘home schooling’ appears nowhere in education legislation. It is ‘education otherwise’ (or ‘education by other means’ in Scotland) and referenced in guidance as ‘elective home education’. ‘Schooling’ and ‘education’ are not synonymous and never have been.

The government has said it is going to publish tougher guidance on home schooling.

Speaking in the House of Lords this afternoon, school system minister Lord Agnew said the Department for Education would strengthen the guidance for local authorities and parents on home education.

According to the DfE, the strengthened guidance will “help parents understand their responsibilities in delivering home education and make sure local authorities are clear on the action they can take”.‎

The government intends to publish draft guidance to gather views from the education sector and parents on home-schooling via a public consultation, which will be launched shortly.

Evidently we are all a radicalisation risk.

How radical is it to want to keep children safe from abuse and dumbing down by the child warehousing industry? How radical is it to value family life above flipping burgers and stacking supermarket shelves on minimum wage for state-subsidised corporations? How telling is it that so many teachers home educate their own children?

It looks very much like the real problem the Lords have is with poor people and minority groups choosing to home educate – the sort of people who experience discrimination and receive less favourable treatment on a routine basis from our great British institutions. How dare the Untermenschen aspire to a decent education for their children!

The government will revise its guidance on home education, the academies minister Lord Agnew has said.

According to the minister, the Department for Education plans to draft and consult on revised guidance documents on elective home education for local authorities and parents.The changes will make clearer to councils the powers available to them and will inform parents about their rights and responsibilities.

Home educating parents are already acutely aware of their responsibilities and their children’s rights.

…parents are not obliged to tell councils, which are responsible for the education of all children living in their areas, of their choice.

Just as vegetarian parents are not obliged to tell the butchers’ federation that their children do not eat meat (at least for now), home educators are not obliged to tell the council that they do not require school places. It is patently untrue that councils are responsible for the education of all children in their area – they just need to provide school places free of charge for parents who want them. They work for us!

It is parents who are responsible in law for ensuring their children are educated, a duty that is increasingly hampered by failing schools, whose sub-standard offerings have undoubtedly fuelled an increase in elective home education.

As a result, councils encounter “difficulties” in tracking pupils making it difficult for them to fulfil their duty to identify children who are not receiving “a suitable education”, Agnew said.

As a consequence, central collection of numbers of home-educated children in England is hampered.

Home educated children are not, by definition, pupils. Maybe the legislators should focus on the pupils not receiving a suitable (or any) education in schools. A novel idea, admittedly, but surely worth a punt?

A “concerted effort” to make existing legal arrangements work more effectively is needed, he said, but councils have also called for changes to the guidance.

Upsetting the balance of the  “fourfold foundation”, which frames the respective rights and responsibilities of parents, local authorities, the Secretary of State and governing bodies in relation to children’s education, would have far-reaching, unintended consequences.

Councils should be careful what they wish for. If they are seriously pushing to assume the legal responsibility for ensuring suitable education for children, they will need to be prepared for litigation by parents and young people whose safety has been compromised and/or whose needs have been left unmet by their schools. It will be a shortcut to bankruptcy.