Tymes Trust and the Scottish Home Education Forum are facilitating a fringe event in Edinburgh on Wednesday (15 November) to hear families’ own testimony on the Children and Young People (Information Sharing) (Scotland) Bill, which is currently before the Education & Skills Committee of the Scottish Parliament.

An advance call for ‘evidence on a postcard’ has attracted a stream of responses from parents keen to have their voices heard after being left unrepresented by MSPs during the passage of the 2014 Children and Young People (Scotland) Act. Scots families are all directly affected by the new bill, which the government hopes will remedy the defects of its original legislation, but have been excluded from Holyrood’s invitation-only evidence sessions and focus group discussions. 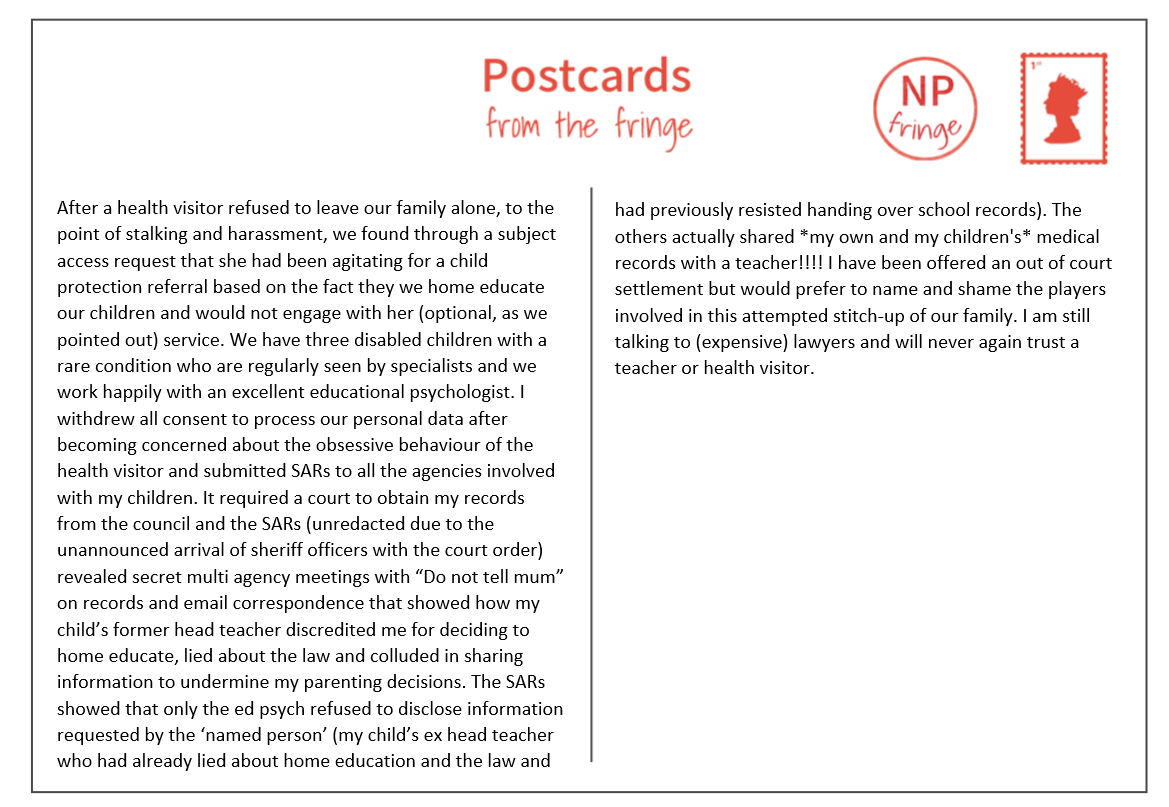 The fringe event will be live-streamed and the audience will respond to panellists’ questions about their experiences and views on the data sharing framework behind the named person scheme and wider GIRFEC policy. They will also be asked whether they think the latest legislative attempt can satisfy the terms of last year’s Supreme Court ruling which struck down key provisions of the 2014 Act.

Following the session, supporters will make their way to the Scottish Parliament to deliver their evidence to James Dornan MSP, convener of the education and skills committee.

Families have had their human rights breached and their private personal data gathered and shared unlawfully, yet parliament does not seem to want to recognise that reality. Instead we continue to hear claims that ‘Parents asked for it’, ‘It’s to give families the support they need when they need it’, ‘It’s an entitlement’ – all things we have heard over the years in defence of the named person legislation.

Families’ voices are conspicuously lacking in parliament’s engagement on this legislation and our people’s event will specifically address that imbalance by giving them the opportunity to put on the record their lived experience of named persons, GIRFEC and SHANARRI. Practitioners may ‘value’ the subjectivity of wellbeing, but the other side of that coin is the reality for families on the receiving end of this undefined dangerously vague concept, which is precisely what five Supreme Court judges condemned.

We  are all heartily sick of being ignored when we were the ones who got it right all along. Home educators commissioned a legal opinion in 2013 which warned that the original legislation was flawed and  predicted the outcome of the judicial review, down to citing the very same case law in the final judgment. It also pointed out the illegality of guidance issued by the ICO shortly after a key English judgment had upheld the established threshold for using personal data without consent.

The government’s vague and subjective notion of wellbeing fails to meet the legal ‘necessity’ test for data processing without consent, which has been underlined by the highest court in the UK, yet families are still having their rights infringed routinely by people who do not understand the law and have actually been encouraged and trained to break it.

Also on the panel will be independent social worker Maggie Mellon, who gave evidence to the committee on behalf of the NO2NP campaign, and former education lawyer Cameron Munro.