Following home educators’ formal representations last October to Deputy First Minister and cabinet secretary for Education & Skills, John Swinney, we have finally had a constructive discussion with the Scottish Government and received assurances that new arrangements for SQA exams this year will take into account the needs of home educated candidates.

We have now received the National Qualifications 2021 Group’s request for information from home educated candidates and families affected by this year’s SQA exam cancellations and would encourage anyone who has been affected to respond. 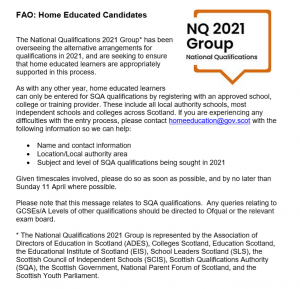 The Scottish Government has further committed to maintaining dialogue with home educators to ensure suitable adjustments are made in the future for independent learners who have experienced discriminatory treatment when seeking access to national qualifications by other means than attending school. Despite home education being an equal status option under the law, private candidates’ access has been noticeably eroded over the past 20 years and, as our research has shown, home educated young people’s needs have been routinely side-lined.

We are aware from our contacts south of the border that the DfE is making arrangements to address the issues faced by home educated candidates taking Ofqual exams and that grants are to be made available to cover the additional costs of centre-based assessments.

Given the number of Scotland-based learners who have opted for Ofqual exams (and indeed IGCSEs, American SATs or equivalent qualifications) due to the barriers to accessing SQA offerings, there was initially some uncertainty over their eligibility for the DfE scheme as they are not resident in England.

University of Exeter researcher Jo Merrett sought clarification of the position, which is disappointing but predictable:

IGCSE’s and international A levels are not covered by the Joint Council for Qualifications. JCQ cover most boards but not CAIE and Pearson Edexcel (IGCSE and iA levels).

The DfE grant funding does not include those resident in Scotland or Wales. There is a “were reasonably expecting to take exams in England” clause, which might help those on the border.

While the Scottish Government hopes to be able to match all independent SQA candidates with centres so that they can receive grades, there is no doubt that many home educated young people will yet again be left high and dry.

We will provide further updates as more information becomes available.

@homeedforums Please can you help? There are many children without diagnosis or support for #tourettes. It is such a difficult condition and can be painful and debilitating. Thankfully, we H.E. Please could you share 🙏 #SignShareHelp https://t.co/bVXb7H1yF5

A massive debt of gratitude owed to all of these people who fought the Scottish Named Person policy and won their case in the UK Supreme Court.

Especially, as home educators, to @Leahurst66

This child is not of compulsory education age until August 2022 and need not enter primary school this year. Fife Council should not be flouting parental wishes and dismissing concerns.
https://t.co/WbL2X5fpi3