The Additional Support for Learning Review by Angela Morgan was quietly published on 19 June, under cover of Covid, without any fanfare from the Scottish Government.

Somewhat predictably, it concludes that the Education (Additional Support for Learning) (Scotland) Act 2004, which places a duty on local authorities to identify, meet and review the needs of children and young people with additional support needs (ASNs), is not being consistently implemented across Scotland, noting that:

“The evidence that emerges from this review affirms that additional support for learning is not visible or equally valued within Scotland’s education system.”

For TES Scotland’s coverage of the ASL Review, see:

During the course of this review, Highland Council in particular had come under fire from campaigners for failing children with ASNs on a grand scale, with petitions, public demonstrations and protests. This hard-hitting report vindicates their concerns and those of parents in other local authority areas. 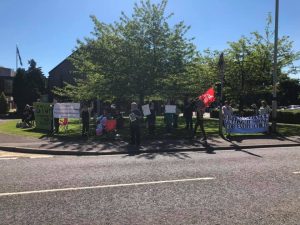 Of course, home education groups were never asked for input to the ASL review, despite children with ASNs being disproportionately highly represented within the home educating community, often due to their needs not being met in schools and the unacceptable but increasingly common practices of off-rolling and illegal exclusion.

‘Not being visible or equally valued’ has always been the lot of home educators, who are at best an after-thought and at worst suffer (un)intended adverse consequences when it comes to policy-making. As for inconsistent implementation across local authorities, we need look no further than legislation and statutory guidance pertaining to home education.

The recent Home Truths research report, published in March by the Scottish Home Education Forum in co-operation with the national membership organisation Home Education Scotland, exposed serious failings on the part of local authorities in their dealings with home educating families and found a culture of ‘home-eduphobia’ across public services. It has of course been ignored by those who would rather we didn’t exist as an embarrassing reminder that school is not compulsory.

One of our report’s recommendations, which will no doubt also fall on deaf ears, is that:

“the government should, in the light of growing numbers of children being withdrawn from school, give early consideration to amending pertinent legislation and guidance so that home educated children and young people with complex ASNs become eligible for co-ordinated support plans (CSPs) on parental application.”

As an inconvenient minority who prioritise the rights of children over the state’s GIRFEC-dictated outcomes, we have ceased to be surprised at our deliberate exclusion from a seat at the table with SHANARRI-worshippers and vested interests. We would, after all, be likely to depart from the new ‘shared language’ of Scotspeak.

Meanwhile, the Scottish Children’s Commissioner (CYPCS) has angered home educators by consistently undermining our equally valid choice and casting aspersions on the efficacy and benefits of home-based education, without ever having engaged with the research evidence or with members of the home educating community.

Indeed he has categorically refused to support home educated children who requested assistance after their rights were blatantly breached. 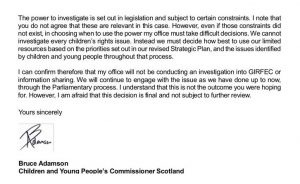 Although the following Courier article is ostensibly about lockdown-enforced ‘schooling at home’, the commissioner has chosen to label ‘home-based learning’ as damaging to children, leaving us in little doubt that he is opposed in principle to elective home education as an equal and legitimate choice made by a growing number of families to ensure all of their children’s UNCRC rights are respected, including Articles 12, 16, 28 and 29.

“We know the home based learning that they have been doing just doesn’t work. It is no substitute whatsoever for a real-life, school-based education.” ~ Bruce Adamson, Children’s Commissioner

Since when did child warehousing reflect real life?

Never has it been so apparent that schools’ primary function is ‘free’ childcare, with state surveillance thrown in. Learning from life is unlimited #homeed ≠ #homeschooling pic.twitter.com/vCshtR1FCm

Playing pick and mix with the UNCRC is never a good look and counters the excellent work of some previous commissioners and UN Rapporteurs, who have had no difficulty in differentiating between education and schooling and have been allies to elective home educators.

Whether or not the ASL Review makes a jot of difference to schooled children with ASNs remains to be seen, but home educators predict a continuing rise in the overall number of children learning out of school post-lockdown.

In a recent interview, our forum co-ordinator commented

The trend has been upwards for several years, for many different reasons. These include dissatisfaction with the curriculum for excellence and a state agenda being forced on children and families through the GIRFEC regime that hasn’t managed to shake off its negative ‘named person’ image.

Child safety and severe school anxiety are concerns for many parents whose children have been excluded or off-rolled from schools due to unmet needs, leaving them no option but to home educate. Budget cuts have undoubtedly exacerbated the problem, so unhappy parents and children are voting with their feet.

The Covid-19 crisis has created a whole new raft of concerns for parents who have been forced into supporting their children’s education at home. Panic-stricken, they flooded into our community support networks expecting us to give advice on school-at-home, which is categorically not the same as elective home education.

Some felt abandoned by their children’s schools, while others felt pressurised into replicating school at home, with unrealistic expectations damaging their children’s mental health. Others were concerned about the invasion of privacy of the family home.

A fair number of these accidental ‘home schoolers’ have stayed to learn more about home education and intend to continue after lockdown. We have no clear idea of how many will do so but anecdotally we can report many more parents seeking to formally withdraw children from school rather than send them back in August. More have decided not to enter them into the system and are reporting misinformation by schools and councils wrongly claiming parents need ‘permission’ to home educate.

Those who are shielding are especially worried about infection risks when schools return, whether part-time or full-time, and say they are not prepared to send their children back, regardless of government assurances. They believe that parental provision of education outside school in such exceptional circumstances represents a ‘reasonable excuse’ in law and will defy instructions to return them.

Home educators have, of course, been every bit as badly affected by lockdown as they have lost access to their own groups and community activities, but they are probably better equipped to cope with the challenges as they are already well used to accessing learning opportunities online and sharing expertise and skills. We have seen increasing confidence among parents who have embraced the idea of education as being much broader than schooling. They are not synonymous and should not be conflated, as it is education, not schooling, that is compulsory.

We hope lessons will be learned from lockdown, so that home and community-based provision is recognised as a viable alternative, not only for those children who are unable to access schooling, but also for those who flourish outside the classroom environment. Parents of children with ME, for example, have long been asking councils to facilitate flexi-schooling and fund virtual schooling rather than force sick pupils into schools, all to no avail.

Despite numerous representations to the Scottish Government over local authorities failing to follow the law and statutory guidance, home educators have been serially fobbed off with the excuse that they have no power to interfere with council decisions. It is therefore astonishing to now learn that Mr Swinney fully intends to intervene if councils fail to follow his orders to re-open schools.