The latest attack on freedom in education from the Isle of Man looks likely to fail following a second reading of its Education Bill, which included draconian provisions for the regulation of home education that were heavily criticised by lawyers for being non-compliant with children’s and parents’ human rights.

As reported by Manx Radio, the Tynwald has narrowly voted this week to send the Bill to a select committee for scrutiny after serious concerns were raised by stakeholders.

A House of Keys committee will take evidence from teachers, parents and other interested parties over the next three months, on the future of education on the Island.

The committee will also look at the findings of the independent Beaman’s review into how the education department interacts with schools.

Under the proposed legislation, the maximum fine for parents failing to ensure children attend school would increase from £1,000 to £5,000.

Meanwhile teachers found to be obstructing a school inspection could also face six months in prison.

The Education Bill will now be referred to the new committee after MHKs failed to agree on the subject.

Let that sink in. Elected representatives ‘failed to agree’ on the paramountcy of human rights in  education after ECHR and equalities contraventions were set out by lawyers in forensic detail.

Commenting on the development, a long-time campaigner for freedom in education likened the move to a DNR (‘do not resuscitate’) order:

In Manx politics this usually kills a Bill stone dead. Last time they did it was with a Criminal Justice Bill. The select committee trashed it and they didn’t try again.

However, this time one of the key architects of the Bill was elected to the committee and has already tweeted: ‘a select committee now still lets us take evidence and will help provide a steer for Keys Members during deliberation of clauses’.

A committee, of course, is not supposed to toe the government line and should hear the evidence objectively. How such an obvious conflict of interest has been passed over beggars belief.

I don’t see this as an extra hurdle – yes I think that a committee of the house during clauses would have been better & more effective but a select committee now still lets us take evidence and will help provide a steer for Keys Members during deliberation of clauses https://t.co/4x1Iq6gNRz

We have previously reported on communications, obtained in 2017 by FOI request, between this Member of the House of Keys (MHK) and the City of Edinburgh Council in relation to home education policy. Part of the problem for him was that he apparently believed that the council’s policy accurately reflected Scots education law and national guidance when it did not, and that compliance with overarching human rights and data protection legislation was somehow optional in the wake of the Supreme Court’s ‘named person’ ruling in 2016.

Again, in his own words: 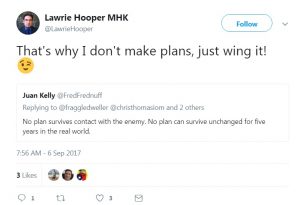 Lawyer and social worker Allan Norman of Celtic Knot, who accurately predicted the outcome of that landmark judgment in his submission to the Scottish Government’s original consultation, had already visited the Isle of Man in 2016 to deliver a presentation to members of the Positive Action Group: ‘Children’s Social Services – Will we ever get it right?’ Clearly, the MHK had not gone along to listen and learn, but it is still available on ‘catch-up’ here.

Allan Norman’s equally thorough report on Home Education and Human Rights on the Isle of Man, published in 2017, concluded:

Changes in legislation, like any other interference with human rights, need to fulfil all the staged requirements set out in the “named persons” case already explored. As there are no specific proposals to evaluate, I do not attempt to do so. Suffice to say if the nature of those proposals were, as those who have asked for this advice fear, to impose a blanket requirement upon home educators to report upon the nature of the education delivered to their children, such proposals are unlikely to be lawful. By way of reminder and in conclusion, the various requirements for lawfulness against which any proposals need to be measured, are set out […] below [paragraph numbers in square brackets]:

“In accordance with the law”

[90] It is now the standard approach of this court to address the following four questions when it considers the question of proportionality: 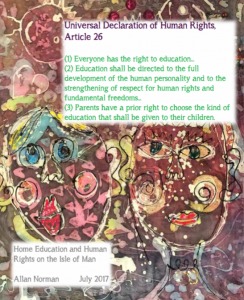 As the select committee enters its deliberations on the Manx Education Bill, which goes far beyond arbitrary interference solely with the rights of home educators and has grave and chilling implications for every teacher, child and family, the question remains: Will they ever get it right on the Isle of Man?

At the time of writing, we are aware of two home educating families who have left the Island and relocated to the UK due to the introduction of this home-eduphobic, authoritarian, anti-education Bill.

One Reply to “DNR for fatally flawed Manx Education Bill?”

System outcomes (#GIRFEC) take priority over children's rights (#UNCRC) as usual. Then they blame the parents for child's #ASN and non compliance.

Just seen a mum tweet that her ASN child was asked to sign a "behaviour contract" before being "allowed back" into school!!
This just smacks of so called "educators" not having a bloody clue about children with ASN! They can no more sign a "contract" than fly to the moon!!!!

We would encourage any #homeed candidates affected by #SQA exam cancellations to respond to #NQ2021 Group's request for info. Deadline 11 April.
https://t.co/QMNdC0HHHk

We would encourage any #homeed candidates affected by #SQA exam cancellations to respond to #NQ2021 Group's request for info. Deadline 11 April.
https://t.co/QMNdC0HHHk