Home »Civil Liberties»The NSPCC report on home education is out

The NSPCC report on home education is out  (original link now dead, see below)

Usual warnings about being in a safe place before reading it. The only good bit is:

Home-educating parents or carers are not more likely than others to abuse or neglect their children.

The above link has been updated with this local saved copy as the original report is now inaccessible, with the message:

We regularly review our briefings and 18 months on from the initial publication this briefing is going through this process.

Those who may still be unaware of the NSPCC‘s ‘form’ in relation to smearing home educators may find these 2009 posts by Gill at Sometimes It’s Peaceful enlightening. 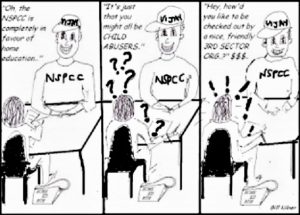 Then there was the unfortunate Vijay…

Also covered in this forum thread:

Is the Government right to be concerned about home-schooling <sic>?

The Victoria Climbie Foundation was none too happy either:

They’d do anything for money. This forum thread also covers the MO of the NSPCC and other rentseeking fake charities:

Home educators in Scotland recently exposed similar claptrap being put about by Perth and Kinross Council to deliberately smear our community.

Following on from our recent post, Hidden from whom? The ongoing stigmatisation of home educators, we have received a breathtakingly arrogant response to our FOI request from Perth and Kinross Council, whose Child Protection Committee has sunk to NSPCC levels in disseminating deliberate falsehoods about home education. We are angry on behalf of home educators, whose lives these Pinocchio people seek to disrupt, and, in particular, on behalf of home educated children who have already suffered abuse in the community as a result of deliberate demonisation by irresponsible ‘protection’ racketeers.

Of the NSPCC report, Elaine observes:

This report is obviously one that was requested as a result of the first case reference (family W). I do feel the NSPCC should be asked to withdraw this report until the references are given in a fully accessible form.

So case W executive summary, which is what the NSPCC used, is a revelation. The children were at one point for a period of many weeks alone in the family home (oldest child 15) and receiving regular visits from children’s social care whilst the mother was in hospital. Erm, actually, that fact alone pretty much kills the NSPCC demands for access to children being a something that needs legislation, but there are so many other points to highlight…

The NSPCC report has also been dissected and dismissed comprehensively by Sue Gerrard on this blog starting with this post.

Just one of many key points:

The law takes a dim view of harm and much legislation is about protecting people from it. But hypothetical risks pose a problem for the law because there’s an almost infinite number of them and it would be impossible (and sometimes counterproductive) to legislate against them all. As a consequence, legislation is almost invariably based on evidence of real risk.

And, of course, the ‘real risk‘ gets lost in the search for the ‘hypothetical risk‘.

NSPCC: determined to learn the *wrong* lessons from case reviews“

Is being known to authorities any protection for children at risk? Absolutely not, according to every single one of the seven serious case reviews cited in this report.”

Another of our forum members:

The NSPCC has published a list of SCRs from 2014.

One of them mentions HE in passing in that the children were travellers. But they weren’t “hidden” – the LA knew about them and about the problems in that family but didn’t take action because “(there was) confusion within the local authority about the legal status of the children …poor interagency planning …failure of agencies to engage specialist advice and input” etc. Nothing actually to do with lack of LA powers to inspect HE, nothing to do with HE.

There are a few cases of teenagers, almost every single one of whom was in council care (but we won’t hear a lot about those!)

Logical conclusion that the NSPCC draws: LAs need more power to inspect children above CSA who are in HE!

How does the NSPCC get away with this shit?

Coincidentally, there’s a report from the DfE on exactly the same subject – lessons to be learned from SCRs. It was prepared in 2012 and overlaps two of the years the NSPCC covered. It’s a lot more detailed than the NSPCC report and very informative.

Funny thing – it doesn’t mention home ed even once.

Neither does their previous report covering 2007-2009.

Barbara comments on the self-serving NSPCC’s concern over “the current limitations on powers to see these children”:

What limitations? The limitations of seeing children in their own homes, going about their own lives is the same for ALL CHILDREN. If moves are made to take away the right to a private and family life and the right to practise the peaceful enjoyment of their homes and lives without undue and officious interference from the state from this group of children, it *will be used* to remove these rights from all children. After all, children have very long school holidays during which time they are not monitored by an employee of the state to ensure their welfare!

It is shocking that they get away with this sort of behaviour, all funded by the taxpayer. It’s time to call out these parasitic fake charities and their fabricated policy-based evidence.