As if we didn’t already know it, Glasgow City Council hates home educators (or ‘home schoolers’ as they like to misterm them)

Their response to last year’s Scottish Government discussion paper in anticipation of the home education guidance review – submitted by the council’s Executive Education Director and Quality Improvement Officer – has recently come to our attention, and its negative framing of home education came as no surprise.

We will of course be sending these public servants copies of our Home Truths report, in which the council’s policies, practices and general competence were rated by the home educating community.

Members of our forum, whose response to the same discussion paper can be read here, were left distinctly unimpressed:

Very poorly written and patronising towards parents.If children have a right to express their opinion on home education, what about all the school children who have no choice/opinion and are being forced to attend? Should they all be given the right to be home educated?

They have never been able to resolve that hypocrisy.

She’s got a cheek quoting GIRFEC. My son used to attend a GCC school – no support for additional needs unless its severe, wouldn’t even entertain assessment, EP or any sort of support. His school had the headteacher and deputes off at the same time, lost 2 or 3 teachers and didn’t sort out temp staff. Lots of emails were fired back and forth between me, her and her assistant. She certainly didn’t get it right for my child or the other 400-odd kids in the school.

Bloody awful… and that’s only reading the first few paragraphs.

We may come back to fisk Glasgow’s response more thoroughly, but for now, our readers will get the gist!

As an antidote to the negative council narrative, why not take a look at some of the activities shared by the Glasgow Home Education Network as an introduction to real-world learning in and around Scotland’s largest city?
The back story
For those who haven’t yet lost the will to live – and that won’t be many – a 2017 FOI response from the council to a series of questions in relation to home education is reproduced in this forum post.

Evidence of covert collaborator recruitment has meanwhile come to light (buried in this recently-revisited 2015 FOI response from the Scottish Government, which will itself be the subject of further reporting). How bizarre (or not) that no approach was ever made to local or national home education groups and that it was such a secretive exercise, presumably designed to cherry-pick cheerleaders for the illegal named person scheme that was ultimately defeated in court with the backing of the home education community. 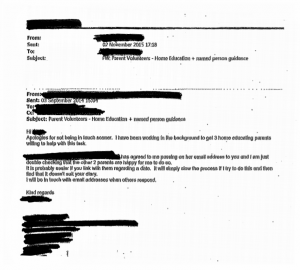