Home »Campaigns»GIRFEC petition revisited (for two minutes)
The (renamed) Education, Children & Young People Committee of the Scottish Parliament has revisited our GIRFEC petition in which we (jointly with Tymes Trust) call for a public inquiry into the human rights impact on families of unlawful GIRFEC data sharing.
Having been languishing in the long grass since late 2019, it got another two-minute airing on 4 May 2022 when the committee agreed to request another update from the Deputy First Minister. So back it has gone into the long grass for a further indeterminate period. (This is what we’re paying for, folks!)
Since the UK Supreme Court ‘named person’ victory in 2016 that gutted the information-sharing core of GIRFEC policy, and the subsequent abandonment of the Scottish Government’s last-ditch attempt at face-saving ‘remedial’ legislation in 2019, families have remained vulnerable to illegal data collection and sharing by public and third sector services. Most professionals appear not to have got the memo (if indeed there was one) that Parts 4 & 5 of the 2014 Children & Young People Act never actually came into force, and that personal information to enforce the government’s preferred notion of ‘wellbeing’ may only be gathered and shared with fully informed consent in the absence of legal necessity.
Lest we forget, the UK Supreme Court (in July 2016) reaffirmed the threshold for non-consensual interference in family life, ruling that assessing the nebulous notion of ‘wellbeing’ did not constitute an exception under Article 8(2) of the ECHR. Moreover, parents are the recognised arbiters of their children’s wellbeing and must not suffer detriment for declining  services below the legal (and uncontentious) intervention threshold of ‘risk of significant harm’. 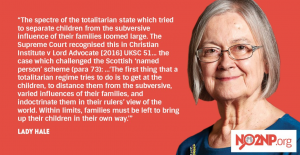 Six years on, the government remains in denial that they lost in court and even encourages the infringement of families’ human rights through what was described in a Westminster EDM as ‘data rape’.
This comment from a parent who is a member of the GIRFEC Abused network sums up the sentiments of many families who have found themselves at the sharp end of the SHANARRI stick:

GIRFEC is basically a shadow legal system operating behind the scenes. And schools and NHS have become the shadow courts by which children and families are harshly judged, not based on objective fact, but subjective opinion. It is disgusting. And I have no idea why or how GIRFEC and NP continue to operate out of control and to the ruin of children and their families.

Prior to the committee’s meeting, the Scottish Express approached us for comment and published an article deploring the lack of movement on the ‘detailed guidance’ that has failed to materialise despite being repeatedly promised by the Deputy First Minister.
Named Persons STILL not replaced as SNP’s ‘zombie’ state snooper policy refuses to die

Campaigners say the “lack of definitive guidance and failure to amend unlawful policies has permitted poor practice to continue” and left families at risk of “over-zealous” interference from the state.

Petitioner Alison Preuss told the MSPs last year: “The DFM’s intention to produce refreshed guidance and support for data controllers is not reassuring to families who have never been consulted as promised, and many remain subject to unwarranted interference.”

She also warned that the new guidance could be subject to further legal action if it does not comply with the Supreme Court’s ruling on data protection and human rights laws.

UK Column also covered the story (timestamp 1:08:30).
Newer members and visitors who are unfamiliar with the history of our petition may wish to take a look at these explanatory links:

Our Scottish Parliament Petition: The Never Ending Story
How does your council measure up on GIRFEC?
Comparison of council claims with published information
Our most recent submission to the committee

Our joint petition with @tymestrust calling for a public inquiry into human rights impact of past and ongoing #GIRFEC #datatheft is to be revisited by @SP_ECYP on 4th May after 2+ years in the long grass. @NO2NPcampaign https://t.co/63xcKL97Ll