Here is a snapshot of an an old Sunday Post article, dated 26/12/71, when Ted Heath was Conservative Prime Minister. 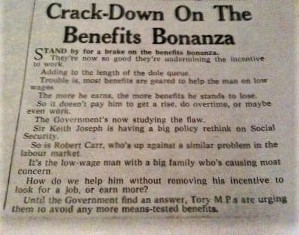 Forty-four years on, plus ça change…

In the early part of the 21st century, reality shows and documentaries about life on benefits in some of the poorest areas of Britain have become a popular form of light entertainment.

‘Benefits Street’ – Its About Exploitation

‘Benefit scroungers’ have become a regular feature of daytime TV, with no shortage of volunteers willing to broadcast their ‘shameless’ behaviour nationwide and/or participate in games of ritual humiliation (apparently there are incentives!)

Scrounger, 18, stars in benefits documentary because he thinks it’ll make him as big as White Dee – and get his teeth fixed into the bargain

Moreover, a relentless stream of soundbites has been repeated ad nauseam by politicians and ‘think tanks’ about “three generations of families who have never worked”.  So we really need to do something about such fecklessness, don’t we?

Well maybe if there was a vestige of truth in the oft repeated claim, but the whopping Big Lie has finally been exposed. It’s nothing more than policy based evidence  – the sort that home educators know only too well – which has been fabricated to suit the agenda of a government hell bent on blaming the ‘undeserving’ poor for having succumbed to at least three generations of social policy failure.

The power of stupid ideas: ‘three generations that have never worked’

The myth of the intergenerational workless household

“The household where ‘nobody has worked for generations’ has long been a favourite illustration of the failure of the welfare state not just among tabloids running ‘Shameless’ benefit scrounger stories, but among broadsheet commentators, politicians and even welfare professionals.”

Iain Duncan Smith attacks use of receipts … which he used to claim £39 breakfast on expenses http://t.co/YtSTFNh77j pic.twitter.com/wYAM2Jh2oK

Salma Yaqoob nailed it when she berated Iain Duncan Smith on Question Time:

“You claim £39 for a breakfast like you can’t afford your own breakfast, when you live on your wife’s estate and have taken 1.5m of tax payers money, that’s what I call scrounging!”

In reality, some families are reduced to scavenging for out of date food from supermarket bins.

Many more are relying on food banks.

But the sensationalist headlines just keep on coming…