Robert Burns summed it up nicely in 1791 when he described as a “parcel o’ rogues” the Scots bourgeoisie, who, in ratifying the 1707 Treaty of Union contrary to the defining principles of the Declaration of Arbroath, sold the autonomy, independence and sovereignty of the people of Scotland in exchange for “English gold”.

Although the context and century may be different, the principles behind Scotland’s famous declaration of freedom are analogous to the long held right of parents to educate their children independently of the state. Above all else, home educators value freedom, but their autonomy, independence and right to self-determination are currently under threat from the policies of the UK Government and the actions of a few individuals claiming representative status.

Following the “EO bombshell”, the details of which Gill has covered so eloquently over at Sometimes It’s Peaceful, the home ed buzz suggests that quite a number of individuals and organisations have contacted Graham Badman, the high heid yin leading the elective home education review on behalf of the DCSF, to express extreme disquiet about “recommendations” made by a handful of individuals, allegedly on behalf of some grandiose sounding sub-committee of Education Otherwise known as the Government Policy Group (GPG).

It is to be hoped that Mr Badman and company will not just “note” the concerns of members of the “diverse” community who have contacted him (as indicated in his office’s standard response) but will elect to consign the said document to his dustbin as it was not authorised by the organisation it purports to represent.

According to information received from an erstwhile trustee of Education Otherwise, the GPG is obliged to consult with the EO board and membership before developing policy positions on the organisation’s behalf. It is further required to ensure that policy changes are not only consistent with EOs own aims and are supported by a majority of its own membership through appropriate consultation mechanisms, but that they are also consistent with the views of the majority of home educators.

EO rightly recognises that it may potentially “develop policy positions which are not universally supported by home educators”. However, in such circumstances, it still requires consultation with members to establish majority support, with a further proviso that the position will “not unreasonably discriminate against or disadvantage a minority of members or other home educators”.

Members, and perhaps some trustees, must therefore be left wondering why the rules were not followed in this case and that no satisfactory explanation has been forthcoming. Bleating about time being of the essence, or issuing an entirely meaningless statement, simply won’t wash when any fool could have foreseen that the proposals were so seriously flawed that they were bound to cause outrage in the EO membership and the wider community.

It seems a lot of things are awry with Education Otherwise, the management of which has been called into serious question over a number of years by members, non members, and current and former trustees. A Freedom of Information request to the Charity Commission has established that 14 complaints have been made by members of the public about the running of the organisation over the past two years, and in a recent court case, EO sought (but failed) to prevent a member contacting other voting members to discuss controversial proposed changes to its Memorandum and Articles, a full discussion of which was allegedly being prevented by trustees.

It is all a bit of a puzzle, but when it comes to the home education review and the so called EO Prospectus, Mr Badman should be aware by now that the views of its author or authors do not legitimately represent the position of Education Otherwise, they most certainly do not represent the views of the wider home education community, and they should be accorded no more or less weight than those of any other individuals who choose to make personal representations.

We have said this before, but will say it again: Mr Badman should be encouraged look to Scotland, where another review team got off to an equally bad start with the home education community after being passed the poisoned chalice of drafting statutory guidance by the then Scottish Executive. Within days of releasing their first draft, which was accompanied by some old familiar state sponsored spin, war had been declared by home education campaigners who drew a “just say no” line in the sand. Opposition politicians rallied behind the home educators’ cause, and the deeply offensive draft document was scrapped and re-written to reflect the will of the Scottish Parliament which had enacted Section 14 of the Standards in Scotland’s Schools Act 2000 with the primary aim of protecting home educating families from overzealous local authorities.

The Scottish statutory guidance was subsequently reviewed and re-issued in 2007 following a period of public consultation and was informed by an independent research report undertaken by the Scottish Consumer Council in co-operation with home educators. In considering evidence – rather than rumour, hearsay and unfounded allegations – the Scottish Government succeeded in producing a document which is considered by the majority of home educators and local authorities to be fair and workable.

A very bad start to a similar process ultimately led to a reasonably happy ending in Scotland, but the road was extremely bumpy along the way. The journey will not be a smooth one in England either, and we can only hope that the bumpy road Mr Badman is presently travelling does not cause permanent damage, either to elective home education or to his own suspension.

Let the line in the sand be drawn once more. 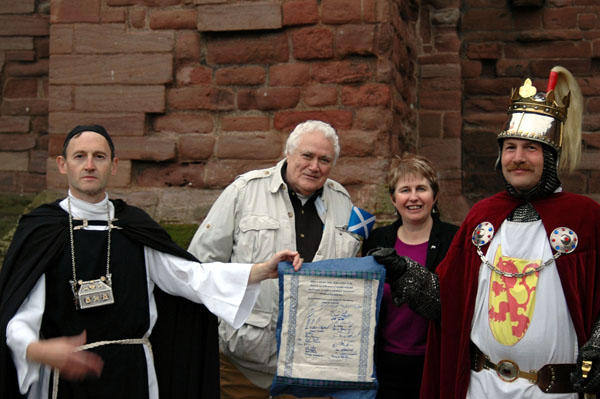 “It is in truth not for glory, nor riches, nor honours that we are fighting, but for freedom — for that alone, which no honest man gives up but with life itself.” ~ Declaration of Arbroath, 1320

@ry0ko3 It's infuriating that schooling is deemed synonymous with education when it clearly is anything but. It is sad to see these homeeduphobic bullies overreaching their limited powers. #homeeducation #equalstatus

Looking forward to the @homedscotland picnic in #Perth on 29th Sept.
https://t.co/EEiUxvmzD7