It was a case of one against three witnesses (and the entire committee) when Jane Lowe of HEAS gave evidence to the Inquiry on 24 November. Watch the session or read the transcripts:

Jane made the point well that all the proposed ‘support’ from the 2012 Inquiry (exams access etc) came to nothing. The agenda is in fact immutable and this is just the latest vehicle to smear home education in order to achieve total surveillance and control of outliers. Are they also planning a register of Gypsy Roma Travellers? No doubt the ‘chumocracy’ is already on standby, just waiting to be handed the contract; indeed we have already uncovered some interesting connections and potential conflicts of interest which will require further investigation.
It makes rather a mockery of another of Michael Gove’s previous assurances 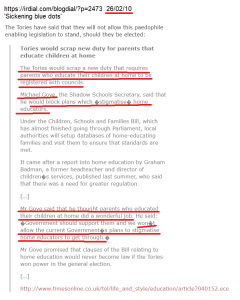 ‘I do not wish to pre-empt any of our final conclusions at this stage . . . The Committee’s view is that a statutory register serving to more consistently identify children outside of school is absolutely necessary.’

This letter is typical of modern political behaviour. Halfon has, for the second time, pre-empted his Committee’s findings and then wrapped up his objective in Orwellian doublespeak.
Parsing the letter lays the plan bare:

‘ . . . a register on its own would not achieve much . . . Without this data, gaps in our understanding of the attainment and outcomes for the full range of children educated at home remain . . . good outcomes for home-educated children . . . advice, support and guidance they needed to make a truly informed decision . . . It would need adequate resourcing and a clear purpose, along with sensitive and consistent . . . focus on the wellbeing of children  . . . ‘

In other words:
We all know the arguments against the first three. I’m not sure that Halfon et al understand the the legal side of the ‘wellbeing’ trigger as we do, and that could well be be their undoing.
Allan Norman wrote this after the Named Person judgement:
The ‘Named Persons’ Scheme – When Protecting Wellbeing Is Totalitarian

But the question was – and I argue the question still remains – whether it is possible to construct a universal scheme that monitors the wellbeing of all children, irrespective of any indicators of harm. In particular, how can such a scheme operate within the law on information-sharing? All information-sharing is data-processing, which is subject to national and EU law.

And the Christian Institute’s QC explained it further at a conference in Edinburgh:
NO2NP Event, 20 March: Aidan O’Neill QC [from 13 minutes]
Halfon  and the DofE may not be about to accept political, ideological and ethical arguments against the regulation of home education. However, they are wading in the same  legal quagmire that engulfed the Scottish Government.
And finally, a wee reminder from us: