Home »Uncategorized»Freedom is a hardy plant

The Declaration of Arbroath set the will and the wishes of the people of Scotland above the King. If he betrayed them he would be removed and replaced. It also affirmed the nation’s independence in a way no battle could, and justified it with a truth beyond nation and race. Man has a right to freedom and a duty to defend it with his life. Freedom is a hardy plant and must flower in equality and brotherhood.

Home educators signed up to their own Decalaration of Freedom in Education at Arbroath Abbey in September 2008 in the presence of John Taylor Gatto. 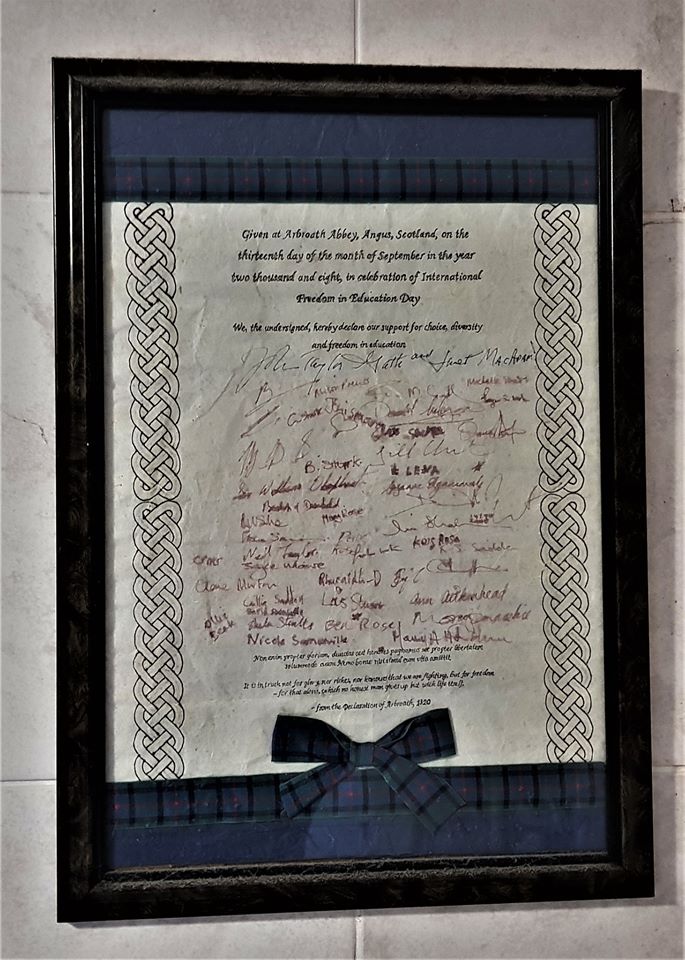 The following sentiments, which borrow from the famous 1320 Declaration, may resonate with home educators in England who are under threat from the latest incarnation of King Edward (Balls) and his human rights abusing henchmen.

“And the home educating people, under the protection of natural laws, did indeed live in freedom and peace up to the time when the dark Lord Badman, protected by the English King Edward and encouraged by many rent seeking servants, when our community had no head and our people harboured no malice or treachery and were then unused to wars or invasions, came in the guise of a friend and ally to harass them as an enemy.

The deeds of lying, threats, cruelty and terrorism of innocent children in their own homes, and yet other outrages without number which they have committed against our people, sparing neither age nor sex, religion nor rank, no one could describe nor fully imagine unless he had seen them with his own eyes.

But from these countless evils we have been set free by the help of our most tireless community members, who, that their people and heritage might be delivered out of the hands of their enemies, meet toil and fatigue, poverty and peril, and bear them cheerfully.

Yet if they should give up what they have begun, and agree to make us or our people subject to a leader or committee or body not of our choosing, we should exert ourselves at once to drive them out as our enemies and subverters of their own rights and ours, and retain others who are well able to defend us; for, as long as but a hundred of us remain alive, never will we on any conditions be brought under Edward’s rule.

It is in truth not for glory, nor riches, nor honours that we are fighting, but for freedom – for that alone, which no honest man gives up but with life itself.”