If you were one of those who changed their Facebook avatar to a favourite cartoon character during the past few days, you were far from alone. Indeed, only serious social media refuseniks could have missed hearing about the latest profile swapping fad via the uber powerful media messenger that is Facebook.

This latest one was said to be part of a viral campaign to wipe human faces from the network, supposedly in support of the prevention of child abuse. Sounds harmless enough, doesn’t it? A bit like the recent 80s week when some of us swapped our profile pictures for various bad hair and big shouldered versions of ourselves taken in that most decadent of decades. Or the post your bra colour status updates that some women took part in to raise awareness of breast cancer while confusing the menfolk. All good humoured and with a good cause tagged on. So far, so good.

Somewhere along the line, however, within the space of a few hours, the cartoon campaign was effectively hijacked in the UK by NSPCC apologists (although not directly by the NSPCC, we understand), who swapped not just their avatars but the message itself.

What was originally this

Change your profile picture to an image of a cartoon from your childhood. The goal is to not see a single human face on Facebook before Dec 6th to support the prevention of Child Abuse. It’s up to you to take action and to forward this post – join the fun!

Change your Facebook profile picture to a cartoon character from your childhood and invite your friends to do the same, for the NSPCC. Until Monday (December 6th), there should be no human faces on Facebook, but an invasion of memories. This is a campaign to stop violence against children.

It was for this very reason that many home educators, who had initially entered into the social media spirit and shared memories of their favourite childhood cartoon characters for a bit of fun, immediately changed their profile pictures to something completely different, like this old favourite from the Balls and Bad(man) old days, in order to distance themselves from any perceived support for the NSPCC. 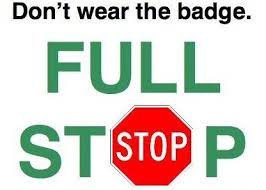 Home educators weren’t slow to comment, either. One recorded her disgust  that:

…the NSPCC – a fake charity that allowed Victoria Climbie to die while they were enjoying themselves at a party – has hijacked the move to replace profile pics with childhood characters so in protest will be changing mine. Later when they have sodded off again I will re instate Roger the Dodger.

The NSPCC is a parasitic fake charity that exploits children and families. It leeches off the taxpayer through government handouts and then lobbies government for policy changes that benefit and further its organisational status. The NSPCC squanders vast amounts of money on highly emotive and misleading marketing campaigns to generate more money to fund its highly paid officers and, of course, future campaigns.

Even the Victoria Climbie Foundation publicly rebuked them for their unwarranted smearing of home educators, and they have few friends even in the charity sector as they muscle in and mop up most of the funds thanks to their PR machine. Even their chief exec is a media man with no experience of children’s services AFAIK.

Such comments created considerable consternation among NSPCC-supporting cyberwarriors, many of whom seemed determined to ignore what the accompanying links were telling them in fully researched, evidence based black and white. Try some (or all) of these as a taster:

Gill’s NSPCC series (a must read for anyone coming to this cold)
What Do They Sow?  National Society for the Procurement of Citizens’ Cash
Home Ed Forums thread: Charity Home Truths
Bishop Hill: The NSPCC – a danger to society
Dea Birkett: It Needs To Be Stopped. Full Stop
BBC:  NSPCC delayed action over Climbie
Spiked Online: A danger to the nation’s children

Just recently, Grit had mentioned the fact that she really didn’t appreciate the latest begging letter from the NSPCC:

No. I’m not supporting the NSPCC this Christmas. Even if you do wear a Santa hat.

From my view, you demonstrate hatred of home educators in particular, and promote an anti-parent agenda in general.

Now, NSPCC, I’m selling you reality. What are you selling me? Apart from the deception you say I can buy this Christmas from you, at the cost of a fiver?

Can I make it clear? NSPCC, don’t contact me again.

But it isn’t just home educators and other previously NSPCC-smeared minority groups who have been sceptical about the cartoon campaign, which should have been no more than a bit of fun. One Facebook user, who had resisted the pressure to displace his beloved  Led Zeppelin with a cartoon character, sagely observed:

I’d naturally expect everyone I know to consider child abuse a bad thing, and I’d be horrified if any of you thought otherwise. By changing your avatar, you’re not actually going to ‘put an end to violence against children’ but you will probably earn some marketing executives their Christmas bonus.

Latest news reports suggest that the calls to action were added to the Facebook message as it Chinese-whispered its way round cyberspace and that it had not started out as a dedicated campaign to prevent child abuse. Although no one would want to argue against such a noble objective, many of us have been highly critical of the call to action in support of the NSPCC.

If individuals want to support a charity which does good work to protect children, they need look no further than the Victoria Climbie Foundation. Or how about one of the other worthy charities which have recently featured on our forums, such as the Cinnamon Trust, Post Pals or these local hospices? They operate on shoestring budgets, yet all achieve what charities should set out to achieve: direct benefit for those who are in need.

Returning to the Facebook war of words, it is no exaggeration to say that many home educators are incandescent at how some people have been so effectively duped by media savvy rentseeking ‘charities’ which spend so much more on PR than protecting children. Despite being presented with supporting evidence, these same people are surprisingly reluctant to believe that the NSPCC is primarily a self serving publicity machine which more than deserves the rotten reputation it has acquired among home educating families against whom it has pursued a vitriolic smear campaign at the behest of its government paymasters.

Of course, a wider social malaise now exists after so many years of nanny state politics and anti-family policies which have rendered natural parents subservient to an army of state sponsored ‘experts’ who know best for everyone else’s children and have the brownie badges to prove it. Then again, some of them manage to slip through the net.

Old Holborn hit the nail on the head in this blog post:

We are unable to raise children anymore. The State simply assumed the role of parent and grandparent and gave us bread and circuses to keep us amused whilst it got on with the serious grown up business of spending our money for their own aggrandisement.

OH’s observation, along with recent recommendations to government by ‘poverty tsar’ Frank Field, prompted an interesting thread on our forums, Unable to Parent, which led to some thoughtful exchanges in relation to parenting classes and the proposed introduction of formal parenting qualifications.

Many valid points were raised on the subject, including this one:

I actually do think that parenting classes should be encouraged (not forced) among all walks of society. There are a massive amount of parents out there (mostly, but not all, young parents) who were never parented well and who don’t know how to even play with their kids! It can so easily become a repeating cycle. It’s all very well for us to sit here and say ‘it’s just common sense’ but if you have no support network, no experience, no hope, then it becomes more complicated.

…society has changed so children no longer get any experience of helping with younger siblings/cousins etc, and the young parents, whose parents were themselves young parents, often have no experience of kids (as do many older parents) and no real support network to call on to help them know what to do in various situations.

The government’s track record was also commented upon

The government’s response has been to propose taking children away from their parents even earlier, by setting up nursery places for ever-younger children whilst withdrawing benefits for parents that force them back to work and so have need of those nursery places. Then they’re proposing to have the state teach children how to parent. Let’s compare how good a parent the state is, compared to natural parents. The record isn’t too good, is it? It highlights yet another government contradiction, where they’re trying to get the best-qualified people to become teachers, and yet are proposing to deprive the best-qualified from this important role.

along with the observation that

… we are at the bottom of a hole dug at the instigation of the state, and the only tool they can offer is another shovel.

We cannot pretend there are easy solutions to problems which have been exacerbated by years of ideologically driven, anti family policies, but the last word must surely go to the mighty Grit, who believes, when addressing ‘parenting’ organisations and state sponsored do-gooders, that

…there’s a space for visceral,guttural language, and it’s here. Fuck off.

In this world, where all our humanity is steadily subject to someone else’s judgement and control, I am standing out as a graffiti parent. Parenting looks like shit, and it’s the most profound art you ever do. That’s graffiti parenting.

Which type of parent are you? Cartoon character or graffiti artist?