Home »Education»Perth & Kinross presentation on home education: what does the panel think?

Readers will recall that Perth and Kinross Council has featured disproportionately in our news items after its Child Protection Committee sought to deliberately discredit home educators by labelling them as likely child abusers.

Robbing the graves of murdered children in an attempt to shift blame from the public agencies which failed them on to a minority group is pretty dastardly behaviour, but we have demolished this type of smear so often that it is becoming tedious. Those unfamiliar with the falsehoods being peddled by so-called professionals in Perth and Kinross (but the disease is highly contagious) should hopefully find this post informative and illustrative of what is being schemed behind closed doors to mislead the public and undermine a legitimate educational choice.

We can at last report on a response to the FOI request for a copy of a presentation on home education (entitled ‘Children Educated at Home’ ) made to the Perth and Kinross Child Protection Committee by a council officer, as reported in the CPC minutes of 29 June 2012 (Item 6.1) [link now dead, but see this forum post]. The response arrived well after the statutory deadline for disclosure and intimated that some ‘personal information’ had been redacted We have no idea why such a presentation should contain personal information within the meaning of the Act when it was clearly being shared in a cavalier fashion with countless council employees and others, according to the CPC minutes of 28 August 2012 (Item 4.3). [see above forum post]. Perhaps it is only being withheld from those whose personal data in relation to lawful lifestyle, parenting and educational choices are being discussed and processed without consent (e.g. home educators), but who knows?

Rather than our commenting on the contents immediately, we thought we should ask the audience (of real home educators) what they think of it and how it reflects (or otherwise) the primary legislation and  statutory guidance. So here it is: 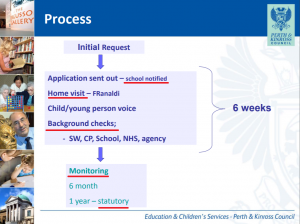 We have not yet finished with this issue and will be making a further FOI request to the Scottish Government to seek disclosure of all communications to and from Perth and Kinross Council which relate to home education. We also have this page bookmarked in anticipation of the minutes being posted following the most recent  CPC meeting on 5 March 2013, since we were unable to attend as the proverbial fly on the wall (or should that be ‘in the ointment’?)

This from Scottish Government on grades: “133,000 entries were adjusted from the initial estimate, around a quarter of all entries. 6.9% of those estimates were adjusted up and 93.1% were adjusted down, with 96% of all adjusted grades changed by one grade."

Not surprising. Those of us who home educate (definitely NOT homeschooling) know it works. We're looking forward to our Not Back To School Day: we get the parks, beaches etc, back to ourselves while all the other kids are sitting in classrooms.
#homeed
#homeeducation https://t.co/b6YfzKOazH